Inside knowledge: Tourism Development in Bali

Inside knowledge: Tourism Development in Bali

The new category of Inside Knowledge is devoted to give interested readers an insight into current tourism related challenges and developments. This excerpt from a report of a current Master in TDM students illlustrates the aforementioned aspects and discusses the ‘Tourism Development in Bali and Seminyak area’. Enjoy the read and feel free to use the comment section to discuss the topic!

Bali as a tourism destination

According to official statistics of the Bali Provincial Tourism Service (Dispar, 2016) in the recent years the destination Bali as whole has seen a steady increase from 2 million foreign visitors in 2008 to 4 million in 2015. A similar picture presents itself when it comes to the domestic tourism market when there were around 6.4 million domestic travelers in 2014 and 7.1 million in 2015. In the years from 2014 to 2015 there was a total increase of 6.2% in international arrivals compared to an increase of 11.7% in domestic arrivals. Accordingly, the predictions for 2015 by the local tourism board have been reached. The 2016 arrival numbers are aimed to increase even more according to predictions of the Dispar, reaching 4.2 million international and 7.5 million domestic tourist arrivals (Bali Discovery, 2016).

The interesting aspect in all these growth predictions is the steadily decreasing occupancy rate according to the statistics of Room Occupancy Rate of Classified Hotels in Bali 2012-2016, which were published by Dispar and the Central Statistics Bureau (Dispar, 2016). Contradicting the overall increasing arrival figures, the statistics illustrate a clear drop in occupancy rates across the board averaging from 60% (2014) to 58% (2015). Although these statistics certainly do not include each and every accommodation on Bali, they actually show a trend that potentially affects more of these businesses in the future. Moreover, these facts show a clear trend of increasing competition and over-supply on Bali. These trends might pose threats and challenges to the hospitality sector but they also bring along benefits for other tourism economic sectors such as retail, transportation, entertainment as well as the food and beverage industry. Nonetheless and according to Horwath HTL (2015), businesses need to consider certain factors, which affected the tourism performance of Bali in 2015 and consequently could do so again in the coming years:

Moreover, an important aspect that is mentioned by Horwath HTL (2015) is the current use of resources, especially the water consumption on the island of Bali. Specifically, in the luxury and upscale market there has been an increase of water-consumption from around 6.3m³ to 9m³ per guest, which represents a concerning increase of 43%. The island of Bali has faced a phase of drought in 2015, which in turn just adds up the shortage of water.

Although there are various tourism areas on Bali, such as Kuta, Nusa Dua and Ubud, with high congestion of tourists, Seminyak certainly is one of the major tourism hot-spots. The destination is known to serve especially the up-scale market that is interested in high quality products and services from industries like hospitality, entertainment, retail but particularly food and beverages.

In 2014 Seminyak was voted as number 19 of over 500 diverse nominated destinations from all over Asia in the category of Travelers’ Choice for Destinations on the website TripAdvisor (Bali Times, 2014). Although this can be seen as a success for the area in particular, there is still a strong competition by the area of Ubud, which ranked on spot eight. In 2016 when Ubud managed to rise to number three in the same award, Seminyak is not even on the list of the major 25 winners anymore (TripAdvisor, 2016). However, the reasons for this aspect are not clear since there is no further investigation by the website.

Relating the tourism developments aspects that were mentioned in the previous paragraph to the area of Seminyak it is to be seen from figure 1, shown below, that there is a decrease from 75% to roughly 73% in total room occupancy from 2014 to 2015. Comparing Seminyak to other areas of Bali it is noticeable that the decrease in occupancy is not too drastic. However, looking at the occupancy in Seminyak of the previous years a clear decrease (approx. 9%) can be identified. Combining this fact with the aspect that there are more room capacity projects in the pipeline and that there is only a slow increase in tourism arrivals, this downward trend might indeed continue in the near future.

A similar picture presents itself when looking at figure 2, as presented below, showing the average daily rates (ADR) by location from 2010 to 2015. Although the decrease in ADR is not as drastic as the occupancy levels there is still a slight downward trend to be recognized. This is explainable due to the fact that many hospitality businesses are trying to compensate for the dropping occupancy in the area of Seminyak. Thus, it can be stated that these businesses adapt their pricing strategies to the high competition, which in turn affects the overall revenues. 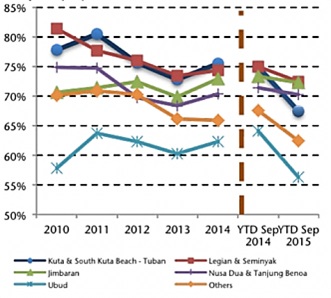 To summarize, the above mentioned aspects clearly illustrate that the recent tourism developments in Seminyak are synonymous for the developments that Bali is experiencing as a whole. Indonesia aims to double tourism arrivals by 2020 through removing visa restrictions for up to 30 countries as well as increasing their overall marketing budget for tourism to USD 75 million (Janes, 2015). Additionally, a high focus for marketing and developments is intended for Bali by for instance planning a second runway for the current airport. 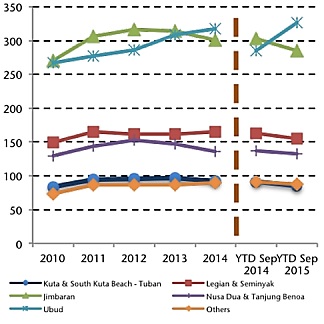 Given these facts and having in mind that Bali has already reached a saturation point of carrying capacity in resources and waste-management the growth predictions have to be evaluated carefully and critically. This approach is essential in order to find a balanced way to further develop Bali into a long lasting and enjoyable tourism destination.

Development Commissioner of India. (2016). SMEs in Indonesia Retrieved on 19th April 2016, from http://www.dcmsme.gov.in/Policies/highlights_of_internatinal_policies/Indonesia%20Policy.pdf