For the first five months the students will spend their time learning the theory in Breda, by attending (guest)lectures on tourism theories, destination management and research methods. By working in groups, they are prepped for the three months fieldwork, which will be pretty intense and the students will be spending A LOT of time with their classmates. For this reason, the year starts with an introduction week, where the new students will to get to know each other in a casual and fun way. This will provide the basis on which the year will be started and meeting new people will be one concern less once they get started with the real work. 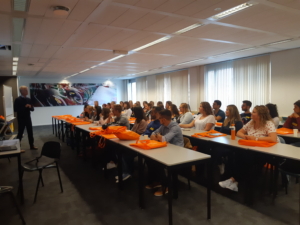 The week started off for the international student at the Pathé Theatre and after noon the entire class was welcomed at one of the building from BUAS. Dean of the Academy Jos van der Sterren gave a welcome speech, after which some staff members also introduced themselves. Then, the students embarked on a photo-hunt. This was designed to lead them through Breda in search of some convenient spots, like banks, governmental agencies, supermarkets, libraries and entertainment facilities (theatres, bars, restaurants, bowling, movies, casino, escape rooms etc.). At certain spots, questions had to be answered and the hunt would finally lead them to a bar, where drinks and snacks were organized. Teachers, alumni and other staff were present to mingle and socialize with the new group, getting to know everyone in a casual setting. 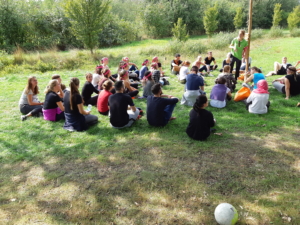 The next morning a bus was waiting to take the students, two staff members and two alumni to the Biestheuvel estate in Hoogeloon for an overnight stay. At this site, (physical) team-building activities were planned. After returning sweaty and tired, it was time for a well-earned beer and some chips. They had time to chat and drink, before the first group had to start cooking. A traditional Dutch dish was on the menu; mashed potatoes with sausage, which had to be made from scratch for 40+ people. (At least they didn’t have to do the groceries..) For dinner, one of the teachers joined and stayed for the rest of the evening. 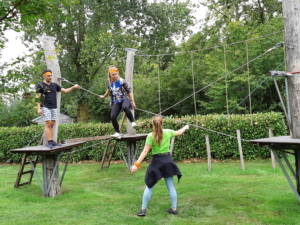 After dinner, pudding was served as the dessert and the second group was in charge of the cleaning. After everyone was settled again with drinks and snacks it was time for an amazing and quite difficult pubquiz! Yet again, teams were made, one alumnus was quizmaster and the teacher checked the answers given. After a brain-wrecking two hours the winners received a bottle of bubbles and BUAS towels. The evening was closed with an open fire and the ever indispensable marshmellows.

The following morning the third group was tasked with setting up the breakfast in the early morning, as the bus would leave at ten. Back in Breda the final item on the programme for Wednesday was the Alumni Event, where student were given the opportunity to talk to alumni and ask questions about anything. After the practical questions were answered, a discussion was staged covering several tourism issues, like overtourism, voluntourism, terrorism in tourism and other tourism topics that kept the students busy. The afternoon was not scheduled and provided some much needed free time to take in all the new impressions and if necessary, there was time to tend to personal business. 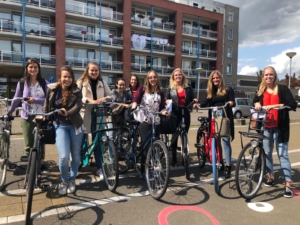 The short break helped everyone get back on Thursday fresh for a packed day for presentations on Breda City Marketing and History, along with a bike tour to see everything they heard about in person. In the afternoon the student presented their most unique pictures they took during the bike tour and talked about their impressions. The day ended at an Italian restaurant where we all enjoyed some pizza and wine. The students then organized themselves and stayed for drinks afterwards.

The introduction week was well received by the students and we are very pleased to be a part of this. Since many students are will have a lot of impressions, we’ll be following them on their adventures during the year and keep track on how they’re doing and what they’re doing. Stay tuned!